Classical? Pop? Rock? Does anyone even care anymore? Music journalist Hugh Morris explores some of the genre-busting composers featured in The Bridge Festival.

Two thirds of the way through Mike Oldfield’s ‘Tubular Bells Pt 1.’, a nervous new groove surfaces, buzzing around for a few minutes until it becomes accustomed to the space. Enter Viv Stanshall (of Bonzo Dog Doo-Dah Band fame) who starts announcing the entrance of new instruments in turn. There’s a grand piano, reed and pipe organ, glockenspiel, bass guitar, “two, slightly distorted guitars”, mandolin, and finally the tubular bells, that come crashing in at the track’s climax.

This famous section of Oldfield’s magnum opus is musical cross-pollination in its most literal form. In their everyday environments, these instruments are part of the furniture – chugging bass guitars in a rock band, a grand piano in a recital hall, tubular bells adding grandeur to orchestral soundscapes. But here, sounds unaccustomed to one another are stacked on top of each other without warning, and the listener has to just get on with it. There’s no reason, save for custom and tradition, why these sounds have ever been understood as discreet, and yet, even listening back today, there’s still the little buzz as Oldfield builds up this cobbled-together collection of odd instruments, and travels towards a shimmering conclusion.

Tubular Bells is fifty next year, and, putting aside its millions of sales, its greatest contribution to musical life was to vigorously re-energise a decades-long conversation about style, musical borrowing, and genre crossover. From the impromptu folk songs in Gustav Mahler’s symphonies, to Charles Ives and Luciano Berio’s brash collages of musical quotations, composers turning to the world of popular music as a way of defying stylistic singularity is a time-honoured tradition. Though the sounds and sources might differ amongst today’s genre-rejecting creators, the impulse is not new at all.

So, given the vast assortment of music to play with, what sort of sounds might you expect today? The unexpected? Maybe. For the music to never settle in one place? Certainly.

In a New York Times interview, Anna Meredith said a critic once compared her to a shark (“I do really like to keep moving,” she conceded). The albums she’s written for her band – Varmints, and the Mercury Prize-nominated FIBS – are highly caffeinated affairs at the poppier end of the spectrum, with thumping bass drums, wiggling synth arpeggiators and a unique lineup – clarinet, cello, tuba, electric guitar, drums – who all seem very up for playing banger after banger. Collisions compound in Meredith’s Bumps per Minute (18 Studies for Dodgems), an album-cum-installation involving plasticky, retro tracks for dodgem cars; riders at her Somerset House residency could influence the composition, each bump triggering a different track. You detect a bit of the silly-serious whimsy associated with PC Music artists (famed for their shiny, synth-heavy tracks indebted to cyberculture), even as Meredith’s environment changes. Anno – her ‘collaboration’ with Antonio Vivaldi – is playful, the Four Seasons treated irreverently as the two composers become intertwined.

“Is it classical, is it pop? I don’t really think about it that way… Who cares about those distinctions anymore?” Meredith told the Observer in 2018. It’s a sentiment shared by many adjacent creators, not least Mica Levi (below). After launching onto the scene with chaotic avant-pop record Jewellery as part of Micachu and the Shapes (latterly known as Good Sad Happy Bad), the group followed it up with ambitious London Sinfonietta collaboration Chopped and Screwed, a mishmash of Houston hip-hop and strange blobs of orchestral sound. Levi’s sound is coarse, and, like Meredith, you feel a sense of wild release when amongst bandmates. But it’s not without precise control too. Approached by director Jonathan Glazer to score their first movie, Levi delivered a visceral, Ligeti-like classic in Under the Skin. Levi seeks a different perspective on groups in their ‘star star star’, a Cage-esque collection of instructional scores for small groups of untrained performers that premieres later this year at the Barbican.

Understanding these label-shirking musicians via the lens of bands seems a useful way in, but again, it’s hardly a new phenomenon. Danny Elfman (of Batman and Simpsons fame) began life as the lead singer/songwriter of wonderfully titled new wave band Oingo Boingo. Before the commercial success of Adiemus and The Armed Man, Karl Jenkins played oboe and saxophone in Soft Machine. And in The Buggles’ music video for ‘Video Killed The Radio Star’ you can catch a glimpse of a young Hans Zimmer, clad in black playing the keyboard. Composers had ‘their’ bands too – think of Steve Reich with the Kronos Quartet, or Brian Ferneyhough with the Arditti Quartet. Then there’s the Michael Nyman Band, Steve Reich and Musicians, Philip Glass Ensemble, all set up to primarily premiere their founders’ music.

This was partly the aim of a young Erkki-Sven Tüür too, who began his musical life in the world of prog-rock with the Estonian group In Spe. There were signs of what was to come in their eponymous album from 1983. Its opening composition, ‘Symphony for Seven Performers’, is a twenty-minute chunk of heady symphonic rock that blends folky flutes with dreamy synthesizers on tracks like ‘Ostium’ and ‘Illuminatio’.

After In Spe, Tüür kept the symphonic, and ditched the rock, moving through twelve-tone music and proto-minimalism to what he calls ‘vectorial’ music, concerned with angles and curves. He’s most often found in traditional classical contexts, amassing ten symphonies, numerous works for large orchestra, and several instrumental concertos. Like Iannis Xenakis or Per Nørgård, Tüür’s large ensemble writing is concerned primarily with processes, the in-betweens of music that’s always building up or breaking down (Tüür has a series of pieces called ‘Archetonics’, meaning the study of architecture). In pieces for smaller ensemble, like Symbiosis (for violin and double bass), his gestures become more focused and dramatic.

Like Tüür, Jonny Greenwood also started out in a band. Even as his composing career has blossomed, Greenwood – now part of Radiohead spin-off The Smile with Thom Yorke and Sons of Kemet drummer Tom Skinner – has never quite been able to shake the idea of being in a band. “It’s going to be nice to be in a band with this person!” Greenwood told the Guardian excitedly on being approached by director Paul Thomas Anderson to score There Will Be Blood. (He’s since scored several PTA films, including 2021’s coming-of-age comedy Licorice Pizza). It seems that, even when working in a completely different setting, there’s still something about the feeling of a band – a close-knit group of mates messing around – that Greenwood wants.

One of the primary musical influences on Greenwood is the Polish composer Krzysztof Penderecki, creator of harsh, dissonant, noisy and thrilling works, most famously his two string ensemble pieces from the early 1960s, ‘Threnody for the Victims of Hiroshima’, and ‘Polymorphia’. ‘Popcorn Superhet Receiver’, with echoes by Penderecki’s ‘Threnody’, was Greenwood’s first large-scale orchestral piece, and a good place to start examining Greenwood’s oeuvre – inspired by the sounds of background noise and radio from long car journeys as a child, it’s noisy but surprisingly tender. It’s a similar story in ‘48 Responses to Polymorphia’, another response to Penderecki that alters the musical palette from shades of grey to warmer hues.

“I love the impermanence of the music live: it’s played in the room – which is itself infinitely variable from one concert to another – and then it’s gone, soaked into the walls,” said Greenwood in a 2014 Guardian piece explaining how classical helped him fall in love with live music. But impermanence characterises so much more than the feat of musical performance. These composers are in the business of reimagining the old and responding to the new, borrowing stuff from others and re-using things they’re not quite done with themselves (many of Greenwood’s scores have been ineligible for Academy Awards due to his incorporation of previous works), and doing all this at a lightning quick pace before moving on to the next project. Writing for posterity is out the window and writing for now is in – blink and you’ll miss it.

Hugh Morris is a freelance music journalist based in Manchester, who contributes to The Guardian, New York Times, The Face Magazine, Jazzwise and Bandcamp Daily. 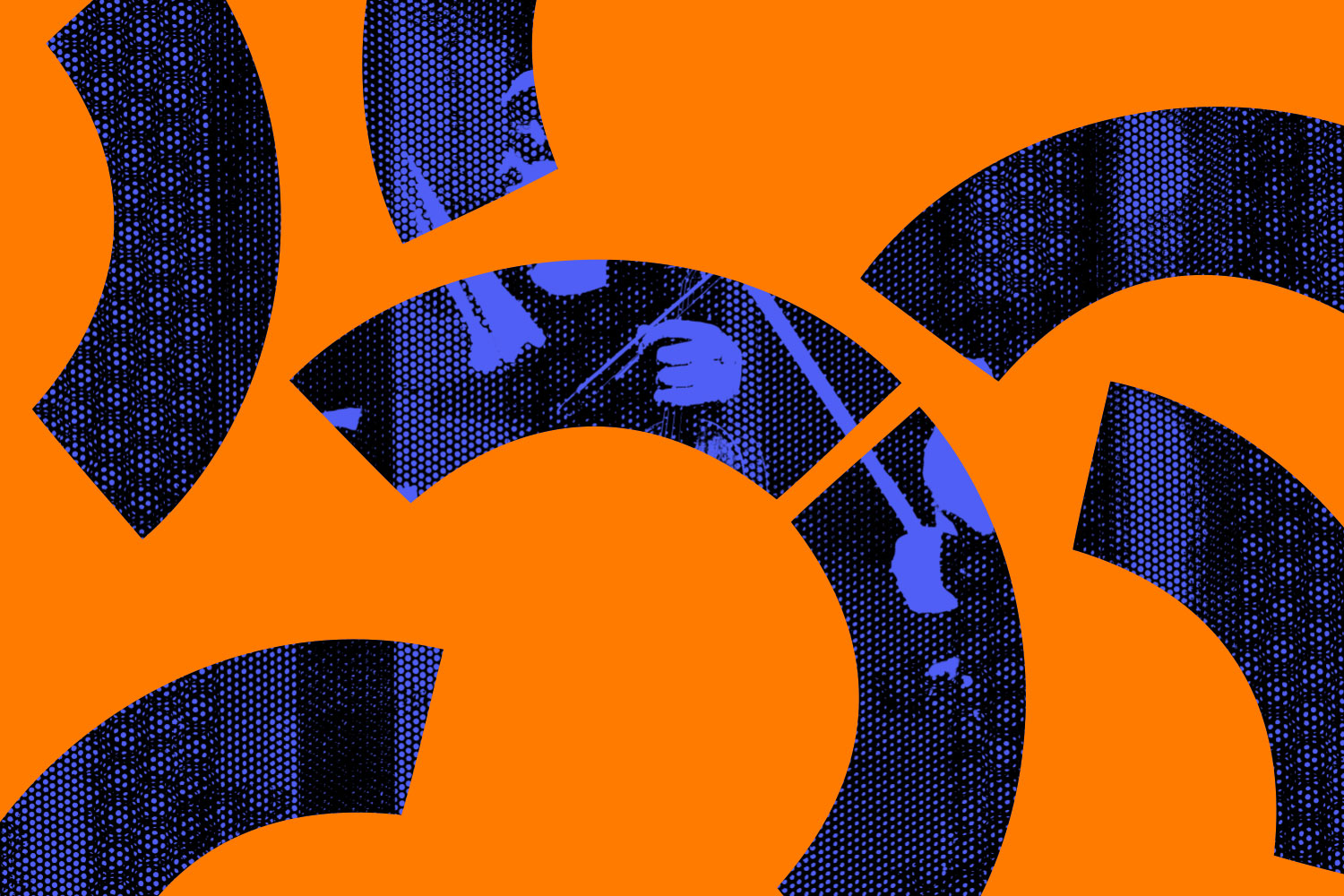