Scottish Ensemble talks to wildly celebrated folk musician Aidan O’Rourke about a new commission, inspired by the poetry of Edwin Morgan and the politics and landscape of a bruised and battered Scotland.

Scottish Ensemble (SE): We were delighted to be able to commission this piece by you and Kit [Downes, the London-based pianist and keyboardist] as part of our 50th anniversary celebrations – and even more so on discovering the inspiration behind it, Edwin Morgan’s poem Slate. Where did the inspiration come from?

Aidan: I hate a blank canvas; I’ve always written about things, whether that’s a person or a landscape or a poem or a short story, but I always start with something.

Morgan’s poem can be taken a million ways, like all good poems, but when I first read it I knew it was written after the Scottish devolution referendum in 1979, so I knew the political landscape that had come before it. It was a strange result for many reasons, and quite a shattering time for some people who had believed strongly in it. This, and the other 20 sonnets Morgan wrote about Scotland, were all written in the months and years immediately after that failed referendum, and he talks about a bruised country, a bruised landmass – he personifies Scotland as this bruised entity.

But, if you didn’t know the context behind it, it could be taken purely as a love poem to the environment, to the earth. Whilst I can still read it and think about Scotland, I really do think of all lines are about a bigger picture now: a bruised world, not just politically but environmentally. I wanted to reframe the poem not so much about Scottish politics, but about the world.

SE: What do you think Morgan is trying to say about the environment – and which elements of it are you trying to convey through the piece?

Aidan: Since it was written the world has changed politically, and the scope has widened out, in that we’re now a bruised Europe, in a bruised world. I suppose in 1979, that was the start of people starting to really become aware about what was bad for the environment. Now we’re much further on, and it’s a catastrophe. So, it’s interesting looking at this poem through the mindset then, based on what folk were exposed to on a daily basis – your daily paper, news from the BBC at certain times of the day – and now, when there’s things flashing up on my phone every 10 minutes about the environment, about Trump, about Brexit. We’re overladen with this information – and yet this poem draws you back to volcanic fires, Staffa cooling, ancient rock. There is something grounding about it; it’s about a situation that’s out of control, and constantly changing, but not without hope. At least, I think that’s what comes across.

Towards the end of the poem there are glimmers of… It’s all about slow change, about this change that is way beyond the points were coming at it from. This idea of ‘no beginning’ – this process of constant change goes back before anyone put any date on it.

I think the hope is that what happened in 1979, what’s happening now, it’s all part of a longer process which will come good.  And I think the last line – ‘their heels kicked flint, chalk, slate’ – which is beautifully onomatopoeic and vivid – I think it’s to do with impatience, with needing work done. There will be work done, and people are doing it, to help this gradual process of changing things.

SE: What does it mean to be inspired by a poem – how does that translate into how you write a piece of music?

Aidan: As far as how the music relates directly to the words and context of the poem, there are so many visual, visceral images, that it’s a really vivid starting point to me. The way his words roll… In my mind, he’s obviously very musical, and he’s quite sensory in the way he talks about things, you can really feel the landscape through this. I find you can feel the gradual changes, and it’s really poignant. I could almost imagine the music already with this in mind.

SE: Do you often find yourself imagining music in connection with images? Does this inform a lot of your composition?

Aidan: I’ve listened to so much music driving around Scotland, and I had this amazing experience when I was driving in the north west of the country. I was on a solo trip and i was trying to write one day,  then climb a mountain the next. Anyway, I was driving round on my own, trying to find the right weather window to go up these mountains, and I had the Ligeti quartets as my soundtrack. When I think of these landscapes now it’s really hard to not think of Ligeti’s vast, sonic vistas…

I hear very different music attached to the landscapes in Slate – but I think that’s what I’ll do with this poem. I think the music being about change, patience and perspective… that will be very important.

SE: You and Kit perform as a duo, amongst both of your many other collaborations and bands. How did that come about?

Aidan: Yeah, we met a couple of years ago when I went to see a gig of his in London. I introduced myself afterwards and it turned out he liked my band Lau – so there was a mutual appreciation, and we had a couple of pints. Then when he was up playing at the Glasgow Jazz Festival I invited him to come and play for a couple of days, come and stay, maybe do a bit of recording.

I was in the middle of this tune-writing cycle at the time, which I started in March 2017, when I wrote a tune a day for a year in response to a short story collection by James Robertson – I’ve now got a 365 tune cycle, which I’m currently recording.

Kit always quotes me as saying “would you like to come up to record ‘a couple of tunes’”… we’ve now recorded something like 140 tracks together in a couple of years! It’s been quite an amazing trajectory between having just met, bringing him up to Scotland, and what we’re doing now.

SE: This is the first time you’ve worked on a piece together, though. Where did this idea come from? And how will you approach it?

Aidan: I think it’ll be an interesting project as I’ve never written something with anyone else before, and neither has he, so how we go about that is going to be a really interesting exercise.

Having spent all this time recording 140 tracks or whatever it is of my music… I wrote all these melodies, introduced them to Kit, and we’d improvise around different arrangements and harmonies – and then of course it completely changes when we play it together.

My music’s very much rooted in my Scottish folk background, the melodies are quite strong. Kit has this incredible sense not just of jazz harmony, but also Ravellian, Debussyan kind of harmonies. Together, we’ve built up a kind of sound palette together over these last couple of years, and because we’ve had so many gigs together, there’s a slightly subconscious way of communicating. We can change very quickly in how we play without really needing to discuss it. It’s quite instinctive, how we work together. And, I feel as though we’re in a really great place, as far as our musical relationship is concerned, to jump on to something new – so this is really great timing, and an amazing ensemble to work with, too. it’s really quite exciting. We’d always spoken about adding something else to the music that we’ve written already – and it was always going to be string quartet, or four cellos, but certainly strings – so this opportunity’s come to us at the perfect time.


In terms of co-writing something, we were trying to find a starting point that chimed with us both, and Morgan’s poem, and its themes, felt to both of us like a really solid starting point. I think where we very much agree is the music being about change, patience and perspective.

SE: Your music is obviously rooted in Celtic and Scottish influences. Does Kit have a connection to Scotland, too?


Aidan: After the tune-writing cycle, we did a bit of a warm-up tour to see how the performances would go down, and I just wanted to do it together round the west coast, so we went to Crear, Iona, up the west coast, over to Mull… he’d just never experienced it before. Having never been north of Glasgow, then experiencing the Highlands and Islands in July, in glorious weather… He kind of fell in love with Scotland. He understands the landscape and the poetry, and he’s been reading some Scottish literature.

SE: Do you find your own musical influences will come through, or does it shift and change working with someone outwith that musical tradition?

Aidan: Actually, I find that when we’re working together, some of the music is quite Scandinavian in its sparseness. The harmonium especially, that instrument is one of the main traditional instruments there and really forms part of that sound, so our music’s often been described as Scandinavian-sounding – but also really Scottish. When I went through a period of trying to make my music not sound folky, or Scottish, everyone who wrote about it said it sounded really Scottish so I’ve given up trying to not do that! Not that it’ll sound like Highland folk music, but just the basic essence of it. If I really open up the creative conduits, that’s really my backbone, and my music doesn’t really exist without all that knowledge and all that experience. All the thousands of tunes that have filtered through me over the last 30 years or so, they’re all there.

What I hope is that There is no beginning sounds like that poem. From top to bottom, I think the poem is so vivid, so musical, so sensory, that if we write something that successfully responds to that, that feels like that, then I’ll be happy. 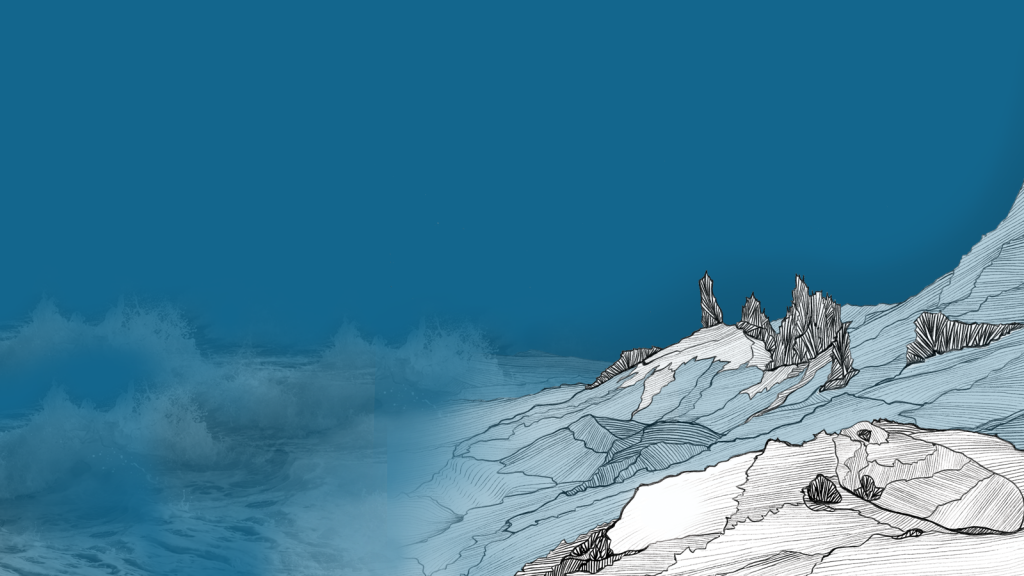